Home » Blog » What is and how to use MACD
Forex Education

What is and how to use MACD

WHAT IS AN MACD INDICATOR?

MACD is the short form of Moving average convergence divergence. This is a top technical analysis indicator used by traders to ascertain the movement of a financial asset. This technical indicator was developed by Gerald Appel in the late 1970s. The indicator was constructed to indicate the fluctuations in the strength, momentum, direction, and p3riod of a trend in the price of a financial asset. The indicator reveals the correlation between two moving averages of the price of a trade.

HOW TO USE MACD INDICATOR

The MACD is estimated by deducting the 26-period exponential moving average (EMA) from the 12-period EMA. 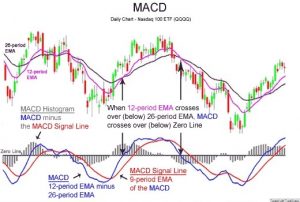 For example, an MACD chart showing three numbers being used in its settings.

Trade settings of 12, 26, and 9 MACD parameters, will be interpreted as thus:

The 12 period is the moving average of the prior 12 periods.

The 26 periods is the moving average of the earlier 26 periods.

NOTE: These parameters used are the default settings of any MACD chart. However, these charts can be changed and personalized to suit the trader’s trading strategy.

Traders often mistake the MACD lines to be the moving average of the price. This is a fallacy.

The MACD is made up of two lines namely:

These two lines are drawn, they are not moving averages of the price. But rather the MACD line is the disparity or distance between two MA’s. They are known as the Exponential Moving averages (EMA’s)

When analyzing an indicator, the MACD line shows the fast-moving average. 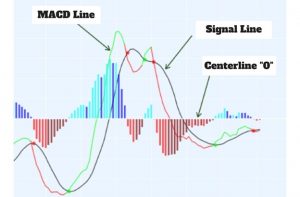 For instance, in a chart showing the MACD line as the distance between the 26-period and the 12-period MAs.

When analyzing a chart, the slow-moving average is the Signal line.

The default setting of most charts is the 9-period exponential moving average (EMA).

This implies that the trader will use the average of the last 9 periods of the faster MACD line and construct it as the slower moving average.

The main objective of the Signal Line is to blur out the noise of the MACD Line, making the readings more accurate.

THE HISTOGRAM OF THE MACD INDICATOR 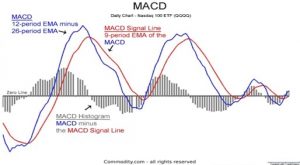 The Histogram illustrates the distance between the Signal line and the Moving average convergence divergence line. The histogram is also a structural indication of the difference between the two lines. Sometimes, it acts as an indicator of a potential crossover.

DIVERGENCE AND CONVERGENCE ARE EXPLAINED.

When the two moving averages the Signal line and the MACD line diverge, the histogram increases.

If the MACD line separates further from the Signal line, this process is referred to as a MACD divergence, because it entails the diverging of the two MAs.

This explains the origination of the technical indicators name Moving Average Convergence Divergence.

The use of technical indicators in trades is for traders to make good trade analyses. It enables traders to know the way the market will go and plan their trading strategy accordingly. However, the use of MACD in isolation is not advised. Traders are advised to use the indicator combined with other technical tools such as the relative strength index and a host of others.

What is and how to use RSI

How to start a Forex brokerage firm

Things to consider before trading in Forex

How to pick the right forex trading platform 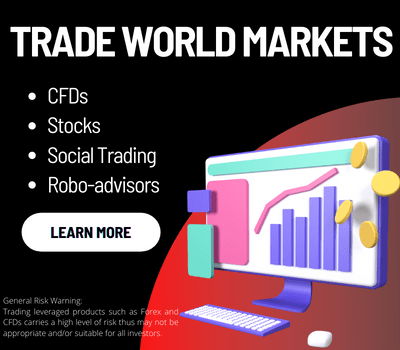